A large range of Free Online Matching games for young and old: children, adults or seniors. It's an online and interactive version of the famous game Memory®, also known as Concentration card game or Matching Game. The rule of the game is very simple, you have to Match all the pairs of identical cards in the shortest possible time (for Solo mode) or to find as many pairs as possible (for 2 player mode). Each turn, you can only turn over 2 cards.
There are several Levels of difficulty and you can choose the number of cards displayed thanks to the buttons located below the game.

All those games have a 2 Player Mode, so you can play with a Friend sitting next to you or Against the Computer. There are also Giant matching games with many cards, up to 70 cards (or 35 pairs) for the most difficult level! To help you choose, we created a section where the matching games are grouped by theme (Animals, Cartoons, Sport, Learning games, Arts & Culture, Christmas...). There is something for everyone! Nothing can replace the pleasure to touch and turn over real cards in a traditional game cardboard in a friendly atmosphere, so we also offer you Printable games: Print and Cut out the cards to make a "homemade" matching game to play at home with family or friends!

The original matching game or Memory® was first published by Ravensburger in the 1960s and it quickly became a must-have board game in many countries around the world... Learn more about the Origin of that game.

These Free games are, above all, a great way to have a pleasant time by enjoying yourself. But they can be also a great exercise to train your memory in a playful way. And the most intellectual of you, will love our intelligent Learning Matching games, our games with words or our games with numbers .

The matching games are compatible with all browsers and all devices: desktop, tablets, smartphones, IOS or Android. The content and the games adjust automatically to your device, so do not hesitate to play the game on your tablet or on your smartphone, you can play wherever you are! Moreover you can replay the same game as many times as you want, it will be different each time! Indeed, every time you start a new game, a random selection of the cards ensures a different game, so you can play endlessly!

Origin and history of the First Matching game 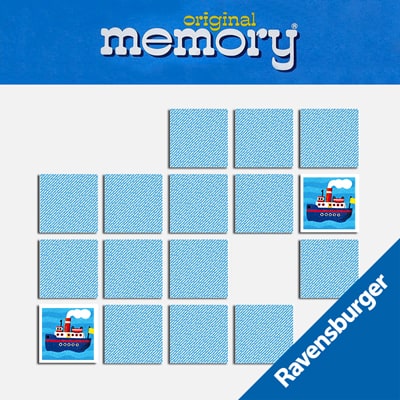 Did you know that it was a grandfather of Swiss origin, Mr. Heinrich Hurter, who had the wonderful idea to invent the First matching game? At the time, Mr. Hurter made a game for his grandchildren with magazine pictures.

This game has been very successful among the Hurter family. So, in 1958, William, one of Heinreich's sons, proposed to Ravensburger, a German Company, the concept of the game invented by his father and, one year later, in 1959, released the First Edition of the game called Images Memory ®. In the following editions its name finally became Memory®.
Since then, the Matching game has become a classic of board games. It has been declined in many versions and its fame crossed the frontiers of many countries all over the world.

In 2019, the Ravensburger Memory ® celebrated its 60th anniversary!

See below some of the editions that have marked the history of the Ravensburger Memory ® :