Matching game for kids - Sonic the hedgehog - online and free 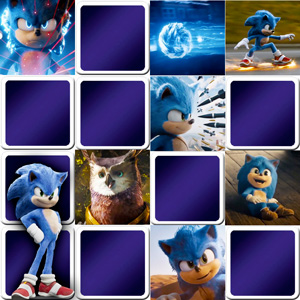 Play with the images from "Sonic the hedgehog", you will see Sonic the famous blue hedgehog able to take the appearance of a blue ball and having the super power to move at supersonic speed, that's why it's called "Sonic". In this memory, you will also meet Longclaw the Owl, Sheriff Tom Wachowski, Dr Robotnik and his army of robots and Tail the Fox.

Did you know that supersonic speed is a speed greater than the speed of sound, this means that Sonic can exceed 340 meters per second (equivalent to 767 mph). This feature allows him to get out of perilous situations but also to perform many mischievous tricks.

This film released in 2020 allows Sonic, the hero of the famous video game published by Sega, to make his first appearance in the cinema. We will discover the origins of this little hedgehog that we will follow throughout a crazy adventure in which he will meet many characters, some benevolent, while others much less.

While he was still living on his distant planet, the Longclaw's Owl saved him from an attack by a tribe... and yes... Sonic is an alien! This owl will give him a ring bag that will allow him to travel through space. It is thanks to one of these rings that he will arrive on our planet Earth and more precisely in Green Hills, a small town in the United States.
Sonic will cause inadvertently a giant power outage and then will be chased by Dr Robotnik recruited by the United States Department of Defense anxious to discover the origin of this mysterious electrical blackout. His friend , the Sheriff Tom Wachowski, will help him to escape this evil doctor and his army of robots...