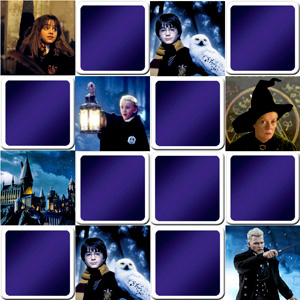 A great matching game for kids with characters from Harry Potter movie such as Hermione, Ron Weasley, Voldemort the dark wizard... so come and play!

The Harry Potter character was created by Joanne Rowling writing under the pen names J. K. Rowling, she's a British author novelist.
Harry Potter is a series of fantasy novels that chronicle the lives of a young boy, Harry Potter, who discovers, at the age of eleven, that he is a wizard.
He goes in a school of witchcraft and Wizardry, called Hogwarts School, where he meets Hermione Granger and Ron Weasley, young wizards too who will quickly become his best friends.
One of the other main characters is Voldemort, a dark wizard and the archenemy of Harry Potter.
The action mostly set in Scotland (Hogwarts), the West Country, Devon, London, and Surrey in southeast England.