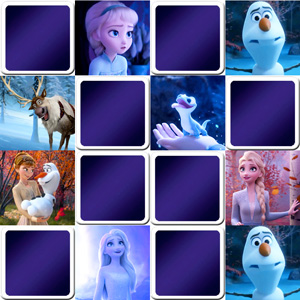 A great memory game for girls with the beautiful Elsa, the Queen of the kingdom of Arendelle who once again sets off on an adventure with Anna, Kristoff, Sven and Olaf... So come and play!

In Frozen 2, a Walt Disney animated film released in 2019, Elsa is the only one to hear a voice calling her without understanding where it came from.
To save the kingdom of Arendelle plagued with attacks by the spirits of fire, wind, water and earth, Elsa, her sister Anna, Kristoff, Sven the reindeer and Olaf, set off in search of the enchanted forest where the mysterious voice seems to come from.
This journey will be an opportunity for Elsa to learn more about the origin of her powers, which will be very useful for her to face with the multiple dangers that the small group of friends will encounter on their way.
This story will also be an opportunity to reveal the past of Elsa's parents and the way they met.
In Frozen 2, You will can see Elsa and Anna when they were still children.

In this free games, the cards are arranged in columns and rows. The children can change the number of cards on the board, and so the level of difficulty, thanks to the buttons located below the game.
Kids have to reconstruct the pairs of cards by turning them 2 by 2. If the cards turned face up are the same (a pair) they win and the pair disappears from the game otherwise the cards are automatically turned face down and they need to make a new try. Find all the pairs in the least moves and in a shortest time. Children will find the full memory game rules here.
They can replay the same game as many times as they want: every time a new game starts, a random selection of the cards ensures a different game, so kids can replay endlessly.

For kids who want some games with more cards, they will find them in giant or big memory games

Why play memory game for kids:

Great exercise to train kid's memory. It's also a good practice to help them memorize the locations of different cards and you will be quickly surprised by their progress. But these memory games will especially allow them to have fun thanks to the many themes specially designed for children.

More in this category: « Memory game for kids - Funny Christmas pictures - online and free
back to top