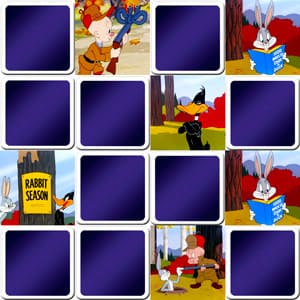 Play with Bugs Bunny, the clever and prankster rabbit from the Looney Tunes. You will see the famous rabbitbut also the black duck called Daffy Duck, Elmer Fudd the hunter, Yosemite Sam the pirate...

Looney Tunes is the source of many more characters such as Porky Pig, Wile E. Coyote and the Road Runner, Sylvester and Tweety, Speedy Gonzales...

Bugs Bunny is the emblematic character of "Looney Tunes", an American cartoon series produced by Warner Bros.
This clever and prankster rabbit always escapes the traps of Elmer Fudd the hunter or Sam the pirate. He is also known for his famous line "What's up Doctor?".
In July 2020, Bugs Bunny celebrated its 80th birthday, indeed Bugs Bunny made his first official appearance on July 27, 1940 in Tex Avery's short film "The Wild Hare".
Its name "Bugs Bunny" comes from "Bug's Bunny". Bugs is the nickname of one of its creator, Ben Hardaway. The rabbit sketches that Bugs made were so convincing that they were adopted by everyone and are the basis of the character's appearance, hence the name "Bug's Bunny".
In an effort to prevent violence, firearms have disappeared in the most recent cartoons (since May 2020). Guns and rifles are replaced by other types of weapons such as hooks, scythes for example, but the characters can still use dynamite, anvils and many other ingenious weapons to fight each other.