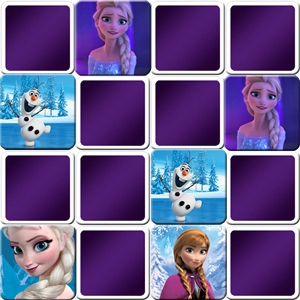 A great memory game for children and especially for girls with all your favorite characters from the Frozen such as Elsa, Anna, Olaf a friendly snowman, Kristoff, Sven the reindeer and Kristoff's loyal friend, Hans the prince of the Southern Isles (a prince charming who is not really charming!) A free and online game, so come and play!

This cartoon, produced by Disney Studios, tells the story of two sisters, Anna and Elsa. Elsa, the eldest, also called Frozen, is the princess of the kingdom of Arendelle, heiress to the throne, she have supernatural powers but she does'nt control them and she's isolated for fear of hurting his sister. Anna, the younger sister, will meet Hans, a prince charming... but not really charming! The other characters are Kristoff, a true outdoorsman who lives high up in the mountains, the Duke of Weselton a dignitary from Weselton (the Arendelle's neighboring kingdom). Marshmallow is an enormous icy snowman born from Elsa's powers.