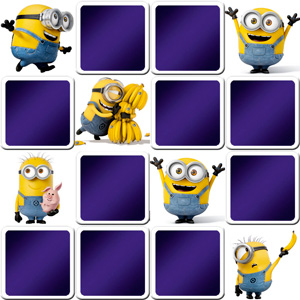 A great Matching game with the famous minions: Kevin, Bob and Stuart. This game is a bit difficult because pictures are very similar!

You will find in this game pictures from the famous minions: Kevin, Bob and Stuart. Kevin is a tall, two-eyed minion with sprout cut hair who loves to make fun of and tease people or Minions, he appears for the first time in "Despicable me 2" (2015). Bob is a short and bald minion with odd-eyed (one green eye and one brown eye), he's the more childish and immature than other minions, he loves his teddy bear called Tim; like Kevin, he appears for the first time in "Despicable me 2" (2015). Stuart, on the other hand, is an one-eyed short Minion with combed hair, he's playful, friendly, intelligent, funny and considered to be a slacker; He's the first of the 3 minions to appear, indeed, he is already present in "Despicable me" (2010).