Dinosaurs Cards with names and pictures

Print the 50 pictures of Dinosaurs with their names 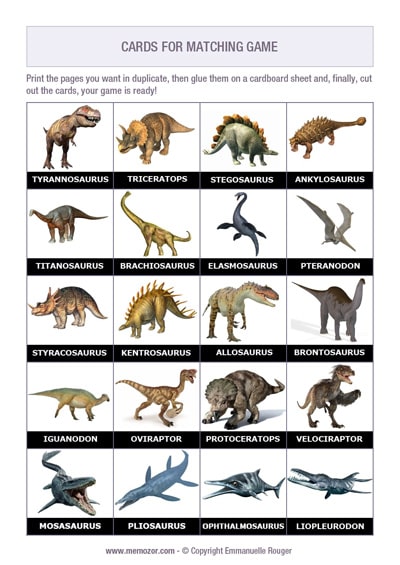 Find here many printable Pictures of dinosaurs, there are more than 50 pictures of carnivores and herbivores! Just below each photo you will find the name of the dinosaur. There are those you probably know such as Tyrannosaurus (or Tyrannosaurus Rex), Diplodocus, Stegosaurus, Triceratops, Velociraptor... But you will also discover less known dinosaurs such as: Mamenchisaurus, Edmontonia, Saltasaurus, Albertosaurus and many others...

To print the PDF, click on the button below. You can also view the Dinosaurs List below.

Cut out the Dinosaurs Cards and make a matching game 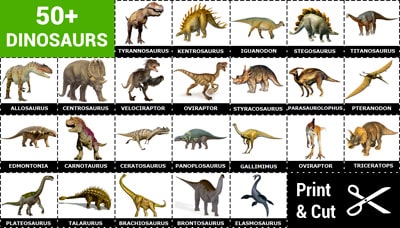 Printable dinosaurs cards to cut out

After printing the PDF above, you can cut out the Dinosaurs cards to get a homemade Matching game. This game may be an opportunity to discover dinosaurs and learn their names.

To make the game, print out the PDF in duplicate in order to get pairs of identical cards and then cut out the dinosaurs. Before cutting out the printed page, you can glue it on a cardboard sheet, in this way, the cards will be more rigid and thus stronger. It also allows to avoid transparency, thus it will be impossible to guess which picture is on the hidden side.

Here is the very complete list of dinosaurs, they are listed alphabetically. Feel free to click on the picture to Zoom in on the dinosaur!

Discover our Online games with Dinosaurs 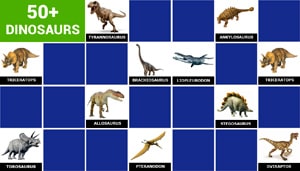 Find all the dinosaurs above in our online Matching Game. In this game you will have to memorize the location of the cards and match the pairs of identical dinosaurs. You can play alone or against the computer. 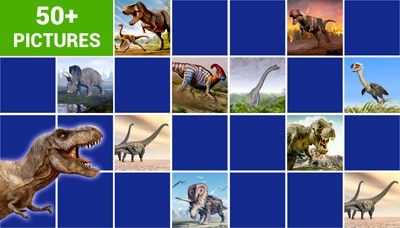 Find pretty pictures of dinosaurs in our online Matching Game. In this game you will have to memorize the location of the cards and match the pairs of identical pictures. You can play alone or against the computer.