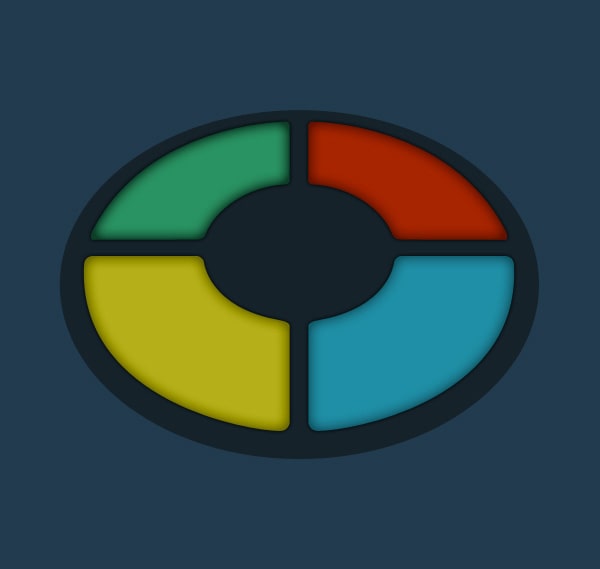 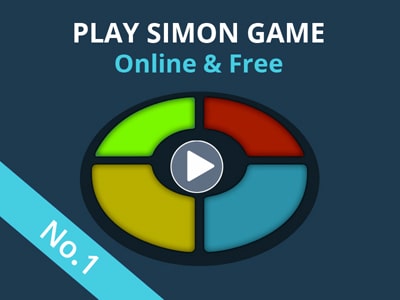 This game is the online version of the Simon electronic game with its circular design and its 4 big illuminated buttons: red, green, blue and yellow. Each key is linked to an electronic sound which will help the player to memorize the series of illuminated keys. You will love this memory game!

Origin and history of the Simon® game Official MB

The SIMON ®... A story that lasts! Actually, this famous memory game blew out its 40 candles in 2018!
The very first edition of the game came in the form of an electronic game with a circular design and 4 big bright and colourful buttons: red, green, yellow and blue. It was published by Milton Bradley (MB) company in 1978 under the trade name SIMON ®.

Did you know that the Simon takes its name from a childish game in English-speaking countries which is called the "Simon says". If you want to learn more about this game, see The "Simon says" game section.

The notes of this game: mi(E), do#(C#), la(A), other mi(a lower one) were not randomly selected but they have been selected for the purpose of produce an harmonious melody and that, whatever the sequential order of the notes.

The inventors of this game are Ralph H. Baer and Howard J. Morrison. They are both famous conceptors and are at the origins of several best-sellers in the toy industry. Howard J. Morrison, and others, if for instance at the origins of: Ants in the Pants ®, Guesstures ®, Brain Warp ®, Hot Wheels Criss Cross Crash ® and many more... Concerning Ralph H. Baer, more specialized in video games, is the father of Magnavox Odyssey ® which is the first home video game console marketed.

In 1980, Hasbro purchased the Milton Bradley company and marketed in turn new versions of the Simon. The best known are listed below:

It is still possible to get the first version. Indeed, some sites offer second-hand vintage games but the prices may be very expensive, around 400 or 500$. Fans of the 80's, you can still purchase the new edition of the first game released by Hasbro under the same name: Simon ®.

As nothing replaces the pleasure of pressing the keys, here is the link to the official Hasbro website. So you can choose your favorite game and find the list of authorized resellers: https://products.hasbro.com.
Amazon being one of the authorized resellers, you will surely find what you want: https://www.amazon.com


Find below the pictures of the main editions:

The rules of the Simon ® game

The principle of the game is simple: the player have to memorize the series of illuminated keys and reproduce it. The purpose of the game is to reproduce the longest series of colors / sounds randomly generated by the Simon.
In each round a new key is added to the series and the game becomes increasingly difficult because the player's memory is more and more solicited.

The "Simon says" game is equivalent to "Jacques à dit" (in francophone countries) or to "Jean dit" (in Québec). It's this childish game who gave its name to the famous Simon® game.
In this game one child issues instructions to other childs, and he's called "the Simon".
For example, the instructions may be:

How to play our online Simon?

The principle of the game is simple: the player have to memorize the series of illuminated keys and reproduce it. the purpose of the game is to reproduce the longest series of colors / sounds randomly generated by the Simon, it's an endless game!
Find the the detailed rules here.

In our Online Simons, you can change the game's difficulty level thanks to the buttons located below the game. The default mode is "AUTO", that means that the speed will gradually increase. For beginners, we recommend that you start with a slow speed game (mode "SLOW") and then you can progressively increase the difficulty level.

If the sound effects of the game bothers you, you can mute the sound thanks to the button located at the top right corner of the game.

These Simon games are free and are compatibles with all browsers and with all devices: desktops, tablets, smartphones, IOS or Android. Theses games are responsive, indeed the content of the page and the game adjust automatically to your device, so you can play wherever you are!

The serie of illuminated keys is randomly generated, so you can replay as many times as you wish because every time you play a new game, the game will be different!
On www.memozor.com, all the Simon games are free and unlimited, they allow you to train your memory, or simply to have fun, and this, as many times as you wish. So do not hesitate to play our Free Simon!

More in this category: « Simon game - Rubik's Cube
back to top