Matching game for kids - shaun the sheep - online and free 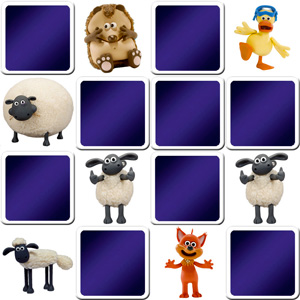 A great Matching game for kids with Shaun the sheep and all his friends from "Timmy Time", a famous British stop-motion animated children's television series that children love to watch! They will play with Timmy, Paxton, Finlay, Mittens, Apricot and many others... kids will love this matching game!!!

Shaun the Sheep is a British stop-motion animated television series. This series tell us about the adventures of Shaun, a skinny and clever sheep, who lives with his flock in a traditional small northern English farm. Shaun is the leader of the flock. Another main character from this series is Bitzer the farm sheepdog, a yellow dog who is responsible for counting the sheep.
Timmy, Shaun's cousin and the only lamb in the flock, appears to be a toddler in this series, but he will become the main character in spinoff series "Timmy Time".

Timmy Time is a stop motion animated series too created by the team behind Shaun the Sheep. It's a great series for both preschoolers with Timmy, a young male lamb (3 years old) who has a black head.
Timmy have many friends: Yabba (a male duckling), Paxton (a male piglet who wears a blue sweater), Mittens (a female kitten), Ruffy (a male puppy), Apricot (a female and baby hedgehog), Stripey (a male badger cub), Kid (a male blue goat with black head), Otus (a male owlet), Finlay (a male fox) and Bumpy (a male green caterpillar).
There is two teachers too: Harriet (a female pelican) and Osbourne (a male owl).