NEW !You can change the speed thanks to the buttons located below the game 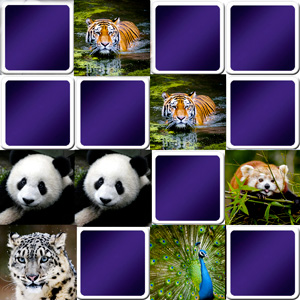 You will find in this game a lot of animal pictures from Asia. Elephant, tiger, giant panda, peacock are surely the best known asian animals. But there is also, red panda, red-crowned crane, Snow leopard, Domestic yak, Malayan tapir and primates like Tarsier, Orangutan, Proboscis monkey and gray langur ... The panda or giant panda is native to south central China, its diet is over 99% bamboo, it's a vulnerable species. On the other hand, the red panda is a mammal native to the eastern Himalayas and southwestern China; It's arboreal, feeds mainly on bamboo, but also eats eggs, birds, and insects. It's a vulnerable species too.