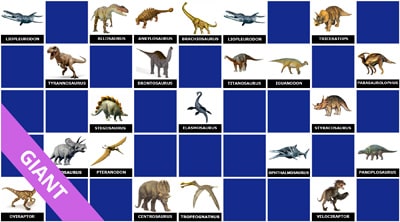 A very big and an intelligent matching game for easy learning of dinosaurs name while having fun!

There are 54 cards which represent different dinosaurs. More than 30 different dinosaurs!!!
In this game the cards are placed face down. On each card there is a dinosaur and its name associated is written on each card. Children or adults will learn the dinosaurs name without even realizing it. Playing, learning is always easier and becomes child's play!
Don't hesitate to play our great Matching game Dinosaurs.

If you like those cards, you can print them on our page Printable Dinosaurs Cards. After printing the PDF in duplicate and cutting out the dinosaurs, you will get a homemade matching game to play with real cards with your family or friends!

You certainly know the names of the most famous dinosaurs such as the Tyranosaurus (Tyranosaurus Rex), the Diplodocus, the Pteranosaurus, The stegosaurus or the Triceratops but do you know the dinosaurs below:

How to play our online Giant Matching games?

In these online Giant Matching games, There are a lot of cards:

As there are a large number of cards displayed, it is a difficult memory game, and your memory will have to work to succeed in finding all the pairs and thus finish the game.