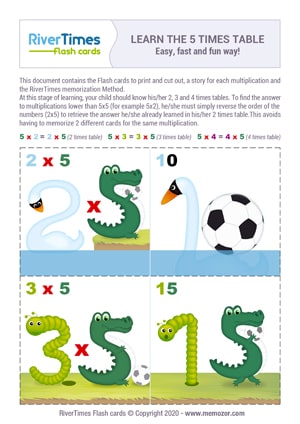 Thanks to these Multiplication Flash Cards to print and cut out, you will learn your 5 Times Table while having fun. These cards illustrate the adventures of a Crocodile in the shape of a 5, the hero of the 5 Times table.

This Easy, Fast and Fun learning way is especially designed for children. Its effectiveness is based on:

The PDF document contains everything you need to easily memorize the 5 Times table:

Click on the button below to print for free the Multiplication Flash Cards for the 5 Times Table in PDF format.

The Multiplication Flash Cards by RiverTimes 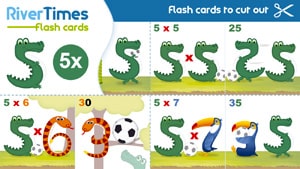 There are 2 types of cards in the PDF document of the 5 Times table:

Making of the cards

Print the PDF above and glue each page containing cards on a cardboard support and then cut out each card following the dotted lines.

RiverTimes Method for fast memorization of your multiplication tables

You will find the complete method in the PDF of the Flash Cards (to download above), you can also consult it here RiverTimes Method for fast memorization of the times tables.

Find here the Rules of the RiverTimes game using Flash Cards. This game will allow you to efficiently revise your tables while having fun. Play with family or friends!


The Funny stories to learn the 5 Times table 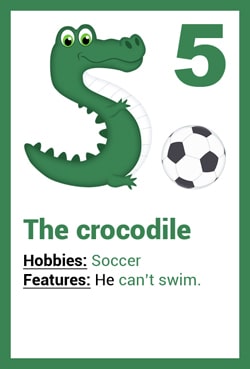 Before telling the stories below, don't forget to familiarize your child with the crocodile which is the animal representing the number 5. To do this, show him/her the Animal card "Crocodile".