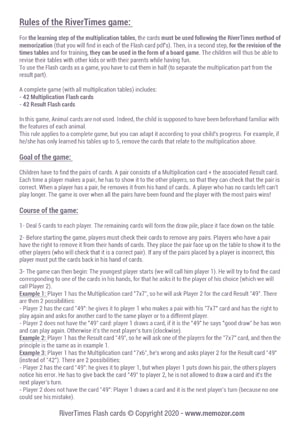 We offer you a game to revise your times tables while having fun. This game uses the Flash Cards and the Animals by RiverTimes. To play, you will need:

Click on the button below to download the rules of the game for revision (in PDF format) and then print it.

Print the rules of the game RiverTimes (PDF)

Rules of the RiverTimes game

For the learning step of the multiplication tables, the cards must be used following the RiverTimes method of memorization, you will find more information about the RiverTimes Method here. Then, in a second step, for the revision of the time tables and for training, you can use them in the form of board game. The children will thus be able to revise their tables with other kids or with their parents while having fun.
To use the Flash cards as a game, you have to cut them in half (to separate the multiplication part from the result part).
A complete game (with all multiplication tables) includes:

In this game, Animal cards are not used. Indeed, the child is supposed to have been beforehand familiar with the features of each animal.
This rule applies to a complete game, but you can adapt it according to your child's progress. For example, if he has only learned his tables up to 5, remove the cards that relate to the multiplication above.

Goal of the game:

The child have to find the pairs of cards. A pair consists of a Multiplication card + the associated Result card. Each time a player makes a pair, he has to show it to the other players, so that they can check that the pair is correct. When a player has a pair, he removes it from his hand of cards. A player who has no cards left can't play longer. The game is over when all the pairs have been found and the player with the most pairs wins!

Course of the game: