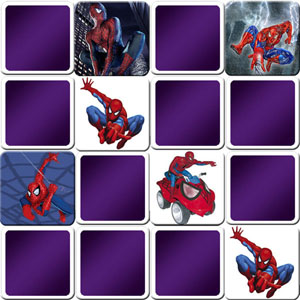 A great matching game for kids with pictures of Spiderman, the famous comic character in red and blue suit endowed with "superpowers" ... so play and have fun!

Spider-Man is a superhero wearing a suit typically red and blue. This character was created by Stan Lee and Steve Ditko. His first appearance is in the comic book in 1962 titled Book Amazing Fantasy. Similar to the spider, is able to move on any surface, whether that is its inclination to spiderman and also the ability to project a spider web very strong and sticky.
His real name is Peter Parker and he gained his super powers following a radioactive spider bite. His powers are a strength and exceptional agility and the ability to adhere to vertical walls with his feet and his hands. It also has a sixth sense enabling him to detect dangers around him. Kids will love this game!