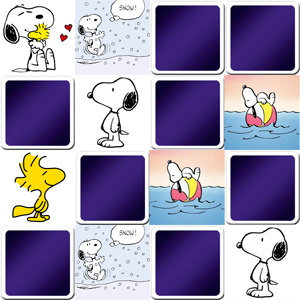 A great Memory game for toddlers with Snoopy and many characters from the famous comic strip. Babies will play with Snoopy, Charlie Brown, Lucy, Linus... They will love this memory game!!!

Snoopy is the famous Charlie Brown's pet beagle in the comic strip Peanuts by Charles M. Schulz. He appears for the first time on the October 4, 1950.

Snoopy is a loyal, innocent and imaginative beagle who is prone to imagining fantasy lives, including being an author, a college student known as "Joe Cool" and a World War I Royal Flying Corps ace.

How to play free memory game online for toddlers:

If your baby is too young, he probably doesn't know how to handle the mouse, so we recommend that baby play on a tablet, it will be easier for him!
A game with very few cards, suitable for toodlers. The cards are arranged in 4 columns and 3 rows for a total of 12 cards (6 pairs), but you can change the number of cards on the board thanks to the buttons located below the game. Kids have to make pairs of cards by turning them 2 by 2. If the cards turned face up are the same (a pair) baby win, otherwise the cards are automatically turned face down and baby have to make a new try. The purpose of this game is to find all the pairs in the least moves and in a shortest time.

You will find the Quick memory game rules here, or you can also Download the Printable game rules in PDF format.

Every time a new game is starting, a random selection of the cards ensures a different game, so babies can replay endlessly!

Why play memory game for toddlers:

A great game to train toodlers's memory in a playful way. Observe how babie memorize the locations of the different cards, he will surprise you!
Every time you start a new game, a random selection of the cards ensures a different game, so babies can replay endlessly!

More in this category: « Memory game for toddlers - shaun the sheep - online and free
back to top