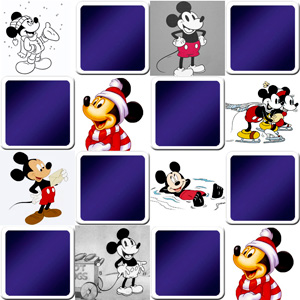 A great Matching game for kids with Mickey Mouse: many recent or old images of the famous mouse. As you will see in this matching game, the appearance of Mickey changed over the years (see below).

As everyone knows, the mouse with big black ears was created by Disney Studios in 1928.
In 2018, Mickey mouse celebrated his 90th birthday.
The appearance of this character, born from the imagination of Mr. Walt Disney, changed over the years, for example: