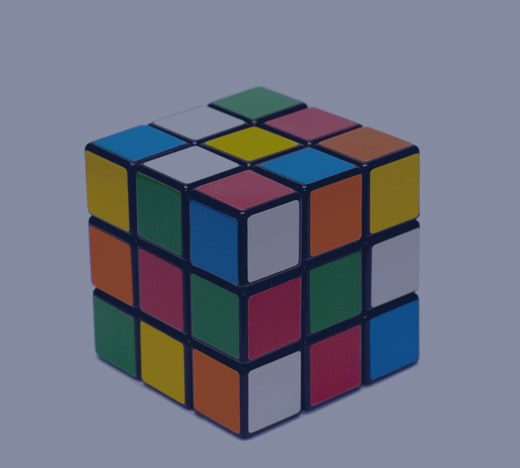 A very original Online Simon game with the faces of a Rubik's Cube, also called Magic Cube. The small squares on each face, are randomly illuminating one after the other. An unique and free game, come and play this Simon!

You will play with 3 of the 6 sides of a mixed Rubik's Cube. So there are 27 little squares coloured in red, yellow, orange, blue, green or white which are the official colours of this famous puzzle.

Origin and history of the Rubik's Cube®

In 1974, Ernő Rubik, an Hungarian professor of architecture, invented this game that became famous. In order to illustrate a spatial geometry course, he had the idea to create this cube for his students. They had to try to understand its internal mechanism.

This first prototype was a large wooden cube composed of 27 smaller cubes (3x3x3). The faces of the cube were all the same color. It is by applying a different color to each face that the Rubik's Cube became a real puzzle game. By the way, Ernő Rubik himself took over 1 month to solve it.

In 1975, the professor obtained an Hungarian patent for his game called the Magic Cube®. Initially, it was marketed only in Hungary, then it will set out to conquer the world market thanks to the company Ideal Toys. On this occasion, it will be renamed Rubik's Cube® and will be an emblematic game of the 1980s.

Other versions of the cube will be marketed: the Rubik's Revenge® (version 4×4×4), the Pocket Cube® (version 2x2x2) and many others...

Ideal Toys was bought by View-Master in 1989 and is now part of Mattell, a big American company specialized in toys and games wich owns very famous brands such as: Barbie, Big Jim, Fisher-Price...

This timeless game still has many good years ahead of it!

How to play our online Simon?

The principle of the game is simple: the player have to memorize the series of illuminated keys and reproduce it. the purpose of the game is to reproduce the longest series of colors / sounds randomly generated by the Simon, it's an endless game!
Find the the detailed rules here.

In our Online Simons, you can change the game's difficulty level thanks to the buttons located below the game. The default mode is "AUTO", that means that the speed will gradually increase. For beginners, we recommend that you start with a slow speed game (mode "SLOW") and then you can progressively increase the difficulty level.

If the sound effects of the game bothers you, you can mute the sound thanks to the button located at the top right corner of the game.

These Simon games are free and are compatibles with all browsers and with all devices: desktops, tablets, smartphones, IOS or Android. Theses games are responsive, indeed the content of the page and the game adjust automatically to your device, so you can play wherever you are!

The serie of illuminated keys is randomly generated, so you can replay as many times as you wish because every time you play a new game, the game will be different!
On www.memozor.com, all the Simon games are free and unlimited, they allow you to train your memory, or simply to have fun, and this, as many times as you wish. So do not hesitate to play our Free Simon!