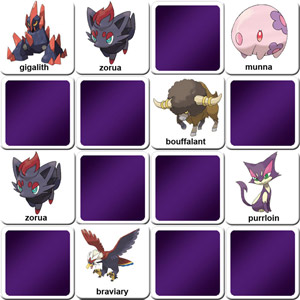 A great matching game especially for boys, or girls who love the Pokemon, with many Pokemon cards (more than 50 different Pokemon). The cards represent different creatures Pokemon of the 5th generation like Zorua, Zoroark, Gigalith, Munna and many others..., so play and have fun!

More than 150 Pokemon in the 5th generation. There are, for example: