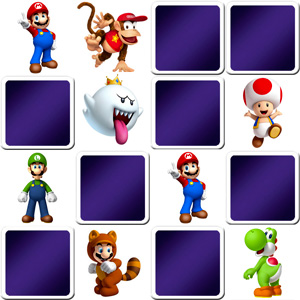 A great matching game for kids with many characters from the "Mario kart" video game as Mario, Luigi, Peach, Yoshi, Bowser, Toad, Koopa, Donkey Kong Jr. and many others...

Mario Kart is a famous series of go-kart-style racing video games developed and published by Nintendo. In this series, players compete in go-kart races, controlling one of a selection of characters. One of the features is the use of various power-up items obtained by driving into item boxes laid out on the course. Mushrooms give players a speed boost, Koopa Shells can be thrown at opponents, and banana peels can be laid on the course.