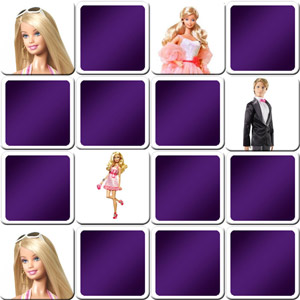 A great matching game especially for girls with cute pictures of Barbie, the girls' favorite doll.

The Barbie doll was created in 1959 by an American woman named Ruth Handler and she's behind the creation of the "Mattel Creations" company.

The idea was conceived when she saw her daughter preferred playing with dolls to the female form rather than with traditional dolls.

Barbie is largely based on a German doll appeared in the 50's and is called Bild Lilli. This doll has been a marked success and is undoubtedly the most famous doll in the world.

The typical representation of the Barbie doll is a young woman with european appearance long and blond hair. But now Barbie exists in various colors of skin or hair and she's able to have different professions.